Max Schupbach, Ph.D. is an internationally acclaimed trainer and facilitator. Together with Arny and Amy Mindell, he is part of the original group that founded Process Work. He has Co-founded, developed, and lead many of its training centers in North America, Asia, Australia, Europe and Africa. He is president of maxfxx, a consulting group working worldwide covering organizations such as Fortune 100 Corporations, International NGOs, Government Agencies, and religious communities. He has facilitated gatherings of Australian Aboriginal communities and Native North American Tribes and coached multi-ethnic executive teams in South Africa. Among his clients are also Polish, Baltic, and Russian teams pre and post Perestroika, and executive teams composed of Eastern and Western members soon after the reunion of the two Germanys.

Max has facilitated community building with Croatian and Serbian members in refugee camps during the Yugoslavian war, and relationships between prison inmates, correctional personnel, and prison administrators in high security prison settings. He has conducted many public open forums with up to several hundred participants on issues and questions of public concern: a recent open forum focused on Islam, Jewish, and Christian relationships in Germany.

Max Schupbach, Ph.D. is President and seminar leader for the Deep Democracy Institute. 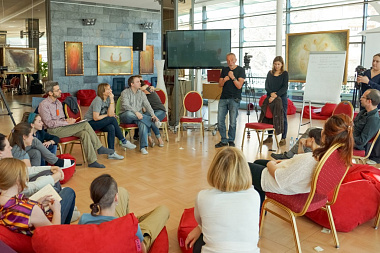 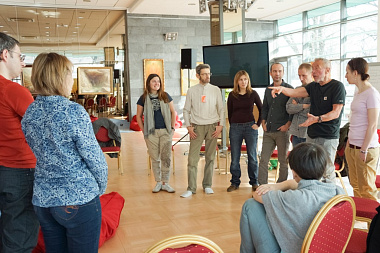 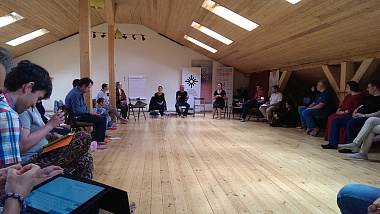 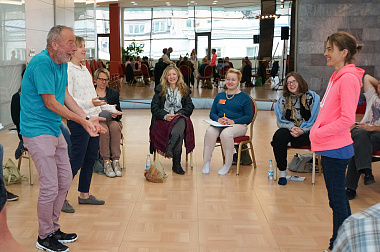 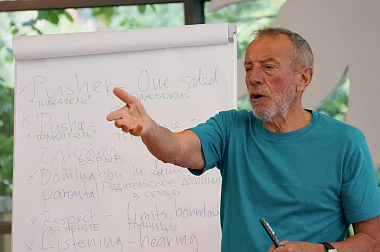 "I had very destructive relationship and three years ago I finished this relationship. After that I had a very bad depression with Paniс attacks. It was a very difficult period of my life and after I decided - okay I should begin my life again,“from zero”.

The episode is dedicated to the move of a young woman from the other side of the country into the capital.

"My name is Nyang, I am from ‎Ho Chi Minh. I study Russian language in Moscow in Pushkin Institute. My problem is dyslexia. That's the first time I felt like I confess about that. And another problem - I have a conflict inside myself. In my country, my father, he asked me to find girlfriend. And also, marriage. But I think, I cannot do that because I have dyslexia".

A young couple and inner-family conflict. Different types of character, behavioral model, varying social ranks, work schedules, different hobbies. But there is love and the desire to be together! How does a couple stay together with all of these differences?

-          We’ve been together for four years, so it’s pretty a lot of time. And when we are talking about the future, next step is children …

-          That’s a question, if we are ready or not. -          Our parents are from different countries and from different religions and have different expectations. My parents are orthodox, Russian. And they want the baby to be baptized and to have Russian name. And Eldar’s parents are waiting for an Azerbaijanian name that would sound, probably, like, Mohammed.

A young man dreams of becoming a singer, but he has to tackle his lack of confidence in his abilities and talents.

"I’m quite a happy person, but I have these conflicts with my son. His name is Lev. And he is twelve. He stopped doing everything that he loved doing before. His grades went down. He doesn’t want to go to school, to musical school, he stopped going to the gym. I’m not very over-controlling mother, but now I completely lost control of him, because now he is into computers, into the telephone, and all this digital stuff."

The Russian documentary film director, a highly creative person, dreams of opening her own film studio.

A young girl has complications in communicating with new people.

In this episode, the heroine tries to get rid of an inner stupor that doesn’t allow her to achieve success.

The hero of this episode is a talented and creative young businessman, who is at the crossroads.

The heroes of this episode are a mom and her 11-year-old son. A conflict of generations! How to listen to one another, to understand one another and to learn to trust?

A young woman-lawyer has problems in her relationship with her female-boss.

A young woman suffers from anorexia.

Moscow, Kiev. 2014
This is a Skype live linkup, filmed at the start of the Russian-Ukrainian crisis by our colleagues from both countries. This was the time, when political events caught many old friends by surprise, dividing them and paving the way for growing misunderstanding. Despite this schism, our colleagu...

According to the theological approach, any problem contains information that can lead us to something new”. Max Sсhupbach.

This documentary series displays the work of psychologists Drs Max and Ellen Sсhupbach (USA) with their Ru...